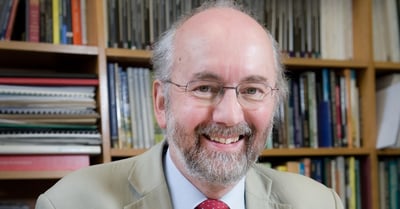 Professor Peter Stone OBE has worked at Newcastle University for the past 25 years and is currently the UNESCO Chair in Cultural Property Protection and Peace at Newcastle – the only such Chair in the world.

The majority of Peter’s current research relates to the protection of cultural property in the event of armed conflict and following disaster.

We spoke to Peter about the important work he does as Chair of UNESCO and his future plans for ensuring cultural property is protected worldwide.

Hi Peter! Could you tell our alumni readers a bit about you to get started?

I joined the University 25 years ago in 1997. I became Director of the International Centre for Cultural and Heritage Studies (ICCHS) in the School of Arts and Cultures in 2001, and then Head of School in 2006 until December 2015.

In 2003 I was advisor to the UK’s Ministry of Defence regarding the identification and protection of the archaeological cultural heritage in Iraq. I have remained active in working with the military to refine attitudes and develop processes for the better protection of cultural property in times of conflict.

I was awarded an OBE in the 2011 Queen's Birthday Honours List for services to heritage education.

That’s an impressive career! What are your most memorable moments?

There are lots I suppose!

One of the highlights for me was being in the House of Commons in 2017 when the Cultural Protection (Armed Conflict) Act was passed that allowed the UK to ratify the 1954 Hague Convention on the Protection of Cultural Property in the Event of Armed Conflict and its two Protocols. I had worked tirelessly since I got involved in 2003 to put national legislation in place to enable ratification to happen. I met, almost on an annual basis, with every Minister who had responsibility for what was required, but regardless of political leaning of the government in power at the time, I got almost word for word the same mantra; “Her Majesty's Government is fully committed to the ratification of the 1954 Hague Convention as soon as parliamentary time allows.” So being in the House of Commons when that went through was a nice feeling. 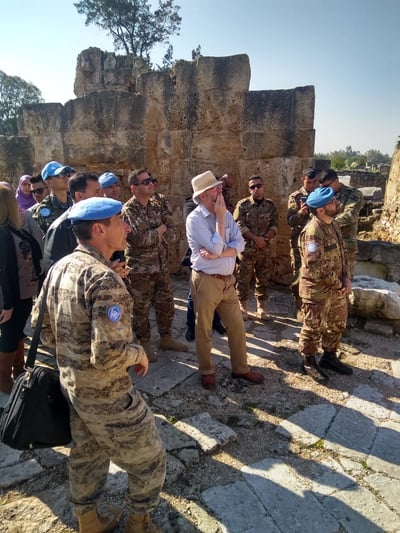 Another highlight, in a completely different way, is seeing how people react to protect cultural property when there’s been a problem. One that I remember well is following the explosion at the Port of Beirut in August 2020. We've been working with the Director General of Antiquities (DGA) in Lebanon since 2013, with the Lebanese Armed Forces (LAF) and the UN peacekeeping deployment in Lebanon (UNIFIL), alongside staff from the municipalities almost on an annual basis. We've been training them, building the partnership, and crucially, the trust between all of those different entities, but also the Blue Shield in Lebanon and a key NGO in Lebanon called BILADI.

[Peter is pictured at the World Heritage site of Tyre in Lebanon in 2019 training officers from UNIFIL (with blue hats) and Lebanese Armed Forces (without hats!)]

When the explosion happened, I was talking to colleagues in Lebanon within a couple of hours. The explosion happened on the Tuesday evening and by the Wednesday morning, colleagues were meeting with the DGA in Beirut to work out what could be done. The Blue Shield and BILADI were asked to lead on the non-government buildings, the historic buildings, archives, libraries, museums, that had been affected. None had windows or effective doors left, many had holes in roofs, and minor internal problems such as burst pipes and collapsed ceilings. Colleagues did an almost immediate photographic report on the damage. The immediate need was simply securing the damaged buildings from weather and intruders, from birds and animals getting into the building and making a mess, to people looking for valuable items they could loot.

That report was ready by the Sunday and we'd been working with international heritage funding organisations, so they were prepared that the report was on its way. And by I think the Wednesday of the following week, we had the money allocated of about €90,000 to secure all of those buildings.

So that was great! But better was that we were contacted by UNIFIL as soon as they had permission to help in Beirut asking how they could help with historic buildings that had been damaged. Over the next weeks Blue Shield and BILADI worked with the DGA, LAF, and UNIFIL to stabilise two important historic buildings that would certainly have collapsed with this combined work. UNIFIL only contacted us because of the partnership, and trust, developed since 2013. Wonderful!

What do you think we as a University do particularly well when it comes to supporting your work and protecting cultural heritage?

Well, I suppose the obvious answer to that is that the University funds an awful lot of it.

When I met with the then Vice-Chancellor and made it clear of my intention to stand down as Head of School after 10 years, he asked me what my next step was going to be. We talked about various things and I said that I was interested in asking the University to support an application to UNESCO to create a UNESCO chair. I explained about cultural property protection, he knew about some of the work I'd done since 2003 and immediately agreed to apply. He understood that UNESCO provided no funding, so agreed to fund the post from the centre of the University if I was successful in the application. He believed it was not only the right thing to do, but it was also the moral thing to do.

We started the Chair on 1 January 2016 and by the middle of 2017 the Endowments Committee made available funding for one and a half other members of staff. I couldn’t do everything that there was now an opportunity to do all on my own. So, the University now funds two and a half people doing this work and that's unique in the world. No other University does anything like that in this area.

What are the plans for the future?

We need to build on what we’ve achieved since 2016. We need to build partnerships with the military, other uniformed services, and the humanitarian sector. Protecting heritage cannot be done by just the heritage sector but through a partnership, where everyone understands that protecting heritage can help them achieve their aims by building healthy, peaceful, stable, and sustainable communities. The next step for the Blue Shield is to create a core international team, in my mind, of 12 people. So, my aspiration is that we move from two and a half to 12 within the next 18 months – a huge ambition! That will work for another five years or so before those 12 need to become 25 or 30! We (or they as I’ll be long retired!) will really then be on the way to what the aspiration was in 1954: to become the cultural equivalent of the International Committee of the Red Cross.

What I envisage with that is a think tank of four people, for which obviously Newcastle will get first refusal, and then a team of eight practitioners based somewhere else in the world. There are 10 or so possibilities for where that team could be best placed and we’d have to think carefully which would be the most suitable.

Those are big plans! How could donations to Newcastle University help to make a difference?

To deliver that we need to have, being simplistic, £1,000,000 a year to fund those 12 posts – including salaries, some project costs, and travel. So, if we get funding for three years, that's £3,000,000 needed. If we get funding for five years, £5,000,000. However, in many ways that’s wasting the money as it all gone by the end of the year. My aspiration is to fund the team in perpetuity which means an endowment of £30 million from which we would finance the team from the interest, leaving the capital of the endowment untouched.

And finally, what are the biggest challenges you’re currently facing when it comes to protecting cultural property?

We're now at a point where we’ve got 30 national committees globally, with another 10 under some stage of construction. We had been talking at very initial stages to a couple of colleagues in Ukraine about setting up a Blue Shield National Committee back in November/December of last year. One of the critical things is to get more people who understand the importance of cultural property protection in the right place, at the right time. It took seven years to develop that partnership and trust in Lebanon, so it will take that sort of time to develop it in any national situation.

One of the problems with Ukraine is, to their own admission, none of them thought that there was going to be an invasion and so very little had been done, with a couple of very good exceptions, to put anything in place to protect cultural property. The same was true in Afghanistan where no one thought the Taliban would regain control. So, the biggest challenge is to get people to realise that you can't do this when a problem hits, you have to do it in peacetime, perhaps at least a decade before, and get it into everybody's DNA.